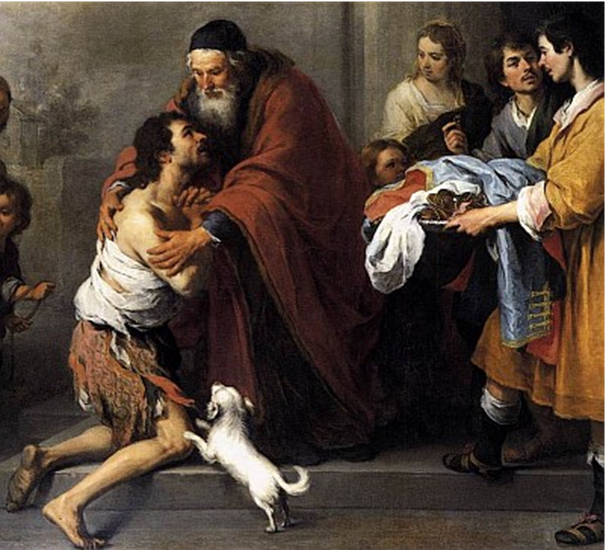 We all are Prodigal

One of the young monks in a Greek monastery committed a serious fault, and the oldest hermit, who was living alone in a shack far from the monastery, was summoned to judge him and decide his punishment. The hermit refused, but the other monks insisted, and he eventually gave in and answered their call.

He arrived at the monastery carrying on his back a heavy bucket with a hole in it, out of which sand was spilling behind him. “I have come to judge the young brother” he said to the monastery leaders. “My own sins, errors and faults are spilling behind me like the sand from this bucket, but since I don’t look at what I leave behind me and don’t see my own mistakes, I come to judge my brother for his own!”

The monks dropped their heads. They understood the wisdom of the hermit and gave up the idea of punishment, humbled in their hearts for their judgement against a child whom God wants to forgive.

Isn’t it an amazing story to speak about the love, joy and forgiveness of the Lord who carried our sins and iniquities onto him to grant eternal life? This Sunday is called Laetare Sunday because joy of our salvation is drawing near to us. In the Western Christian liturgical calendar Laetare Sunday is the fourth Sunday in the season of Lent. Traditionally, this Sunday has been a day of celebration, within the austere period of Lent. This Sunday gets its name from the first few words (incipit) of the traditional Latin entrance (Introit) for the Mass of the day. “Laetare Jerusalem” (“Rejoice, O Jerusalem”) is Latin from Isaiah 66:10. The term “Laetare Sunday” is used by most Roman Catholic, Lutheran and Anglican churches. The word comes from the Latin laetare, the singular imperative of laetari: “to rejoice”. The Entrance antiphon reads:

We must rejoice in the Lord because he loved us and died for us so that we may not be trapped in the evil around us. St. Paul writes in the letter to Philippians “rejoice, rejoice in the Lord, again I say rejoice in the Lord” is a beautiful invitation to come out of our doubts, faults and sins and believe he has the power to forgive. St. Augustine reflects the same element in this way “Those who have been freed and raised up follow the light. The light they follow speaks to them: I am the light of the world; he who follows me will not walk in darkness. The Lord gives light to the blind. Brethren, that light shines on us now, for we have had our eyes anointed with the eye-salve of faith. His saliva was mixed with earth to anoint the man born blind. We are of Adam’s stock, blind from our birth; we need him to give us light. He mixed saliva with earth, and so it was prophesied: Truth has sprung up from the earth. He himself has said: I am the way, the truth, and the life. We shall be in possession of the truth when we see face to face. This is his promise to us. Who would dare to hope for something that God in his goodness did not choose to promise or bestow? We shall see face to face. The Apostle says: Now I know in part, now obscurely through a mirror, but then face to face.

John the apostle says in one of his letters: Dearly beloved, we are now children of God, and it has not yet been revealed what we shall be. We know that when he is revealed we shall be like him, for we shall see him as he is. This is a great promise.

If you love me, follow me. “I do love you,” you protest, “but how do I follow you?” If the Lord your God said to you: “I am the truth and the life,” in your desire for truth, in your love for life, you would certainly ask him to show you the way to reach them. You would say to yourself: “Truth is a great reality; life is a great reality; if only it were possible for my soul to find them!”

Someone wrote the following poem to open our hearts and minds that though we all are prodigal and turn away from the Lord, but he is gracious and merciful, and he does not account our sins.

I have in my hands two boxes,

Which God gave me to hold.

He said, “Put all your sorrows in the black box,

And all your joys into the gold.”

I heeded His words, and in the two boxes

Both my joys and sorrows I stored,

But though the gold became heavier each day,

The black was as light as before.

With curiosity, I opened the black.

I wanted to find out why,

And I saw, in the base of the box, a hole

Which my sorrows had fallen out by.

I showed the hole to God and mused,

“I wonder where my sorrows could be?”

He smiled a gentle smile and said,

I asked God why He gave me the boxes,

Why the gold and the black with the hole?

How wonderful it is to see that God loves us and blesses us every blessing we need in our lives. The Psalmist says, “if you remember iniquities and transgression, who could be save? but with you is found mercy and forgiveness”.  We too read in the Book of Prophet Ezekiel that God has no pleasure in the death of a wicked “But if the wicked turn away from all their sins that they have committed and keep all my statutes and do what is lawful and right, they shall surely live; they shall not die. None of the transgressions that they have committed shall be remembered against them; for the righteousness that they have done they shall live. Have I any pleasure in the death of the wicked, says the Lord GOD, and not rather that they should turn from their ways and live?  But when the righteous turn away from their righteousness and commit iniquity and do the same abominable things that the wicked do, shall they live? None of the righteous deeds that they have done shall be remembered; for the treachery of which they are guilty and the sin they have committed, they shall die.

The First Reading explains to us that God has the power to remove any disgrace which can thwart us from believing in God through the Blood of the Lamb. God keep giving the Bread of eternal life (please read John 6 & Hebrews 9) to understand the real meaning of Jesus being our real Bread of Life. The Israelites were prodigal children in a time they complain (please read Psalm95) but God’s love was unconditional, and he brought them to promised land where honey and milk flows.  How many times we have become disobedient to God but still he has shown his love?

In the Gospel today the scribes and the Pharisees who studied Jesus’ actions were scandalised by the things that Jesus did and murmured against him: “This man is dangerous!” What scandalised them most was the fact that “Jesus ate with tax collectors and sinners, that he talked with them”. Hence their reaction: “this man offends God; he desecrates the ministry of the prophet which is a sacred ministry” and “he desecrates it in order to draw close to these people”. The music of their murmuring is the music of hypocrisy, and “Jesus responds to this murmuring hypocrisy with a parable of “Prodigal Son” in which he shows the unconditional love of the Father and his heart of mercy.

The story not only highlights some features of the father who is a man always ready to forgive and to hope against hope but also it exposes our human nature and understanding of other.

The figure of the Father in the parable reveals the heart of God. He is the Merciful Father who, in Jesus, loves us beyond measure, always awaits our conversion every time we make mistakes; he awaits our return when we turn away from him thinking, we can do without him; he is always ready to open his arms no matter what happened. As the father of the Gospel, God also continues to consider us his children, even when we get lost, and comes to us with tenderness when we return to him. He addresses us so kindly when we believe we are right. The errors we commit, even if bad, do not wear out the fidelity of his love. In the Sacrament of Reconciliation, we can always start out anew: He welcomes us, gives us the dignity of being his children and tells us: “Go ahead! Be at peace! Rise, go ahead!”.

“Let us taste and see that the Lord is good” as this parable invites us to start over. A Zen master was given a beautifully crafted crystal cup. It was a gift from a former student. He was very grateful. Every day, he enjoyed drinking out of his glass. He would show it to visitors and tell them about the kindness of his student.

But every morning, he held the cup in his hand for a few seconds and reminded himself: “This glass is already broken.” One day, a clumsy visitor toppled the glass on its shelf. The cup fell down. When it hit the floor, it was smashed into thousands of tiny pieces. The other visitors gasped in shock, but the Zen master remained calm. Looking at the mess in front of his feet, he said: “Ah. Yes. Let’s begin.” He picked up a broom and started sweeping.